That was brutal. 9 wins. Jokingly, I put in State of the CUnion address some time last year what team would have more wins: football or basketball. Of course, basketball should have more wins but it was closer than we all wanted to admit. I surely thought we could get to ten wins but losses to teams like Montana State, Vermont and Buffalo along with only one Big 12 conference win is a recipe for disaster. The team's 22 losses set a new school record for defeats in a year. Today against Texas, the Buffs with their style of play, kept in close like so many games this year but never pushed the Longhorns to think that they could pull off the upset. Texas ended up claiming victory 67 - 56 in another game that the Buffs never led although remaining within three possessions most of the contest.

Usually a sure thing, Cory Higgins was guarded well by Texas G Dogus Balbay in the first half along with a zone that kept him under wraps.  Higgins ended the game with five measly points, far from his 18 ppg average this year going 1 - 11 from the field. Dwight Thorne led the Buffs with 15 but was cold towards the end of the game. Combined, CU's two best scorers were 5 - 22 from the field and 2 - 10 from deep. That won't get it done in the Big 12 conference tournament.

On the flip side, like Higgins, Texas guard A.J. Abrams only put up six shots and scored ten points. He leads the team in both shots per game (14.1) and points per game (16.7). Abrams and Higgins lit up the scoreboard in the first meeting of these two teams but were rather ineffective/a non factor today. What killed the Buffs was once again the lack of an inside presence. Today, Texas C Dexter Pittman was the most recent big man to dominate the middle against Colorado. He scored 26 while going 9 - 13 from the floor. He also grab ten rebounds. Pittman didn't even average 10 and 5 in the regular season. Calling all centers who want early playing time at a Big 12 school...the Colorado Buffaloes need you. Pittman is very pedestrian and is probably the 4th or 5th best player on this Texas team. Colorado had no response to the inside presence.

The Buffs ended the year at 9 - 22, 12th in the Big 12. I guess the good news is their is no where to go but up. That being said, like many have stated before, I don't know where the light is at the end of the tunnel. Higgins is a good player, Thorne has his nights, maybe Veal and Kelley can bring some energy but unless this team gets more explosive and tougher on the inside, it is hard to see them competing in the Big 12 in the next two to three years. That's it. Done with basketball, let's bring on football.

A pretty good article here from the Daily Camera talking about the quarterback battle, this time from the perspective of Cody Hawkins. If you haven't seen the ones about Ballenger and Hansen, they are linked in the article. Same old story on Cody. He works harder than anyone else, knows the system better than anyone else but he has physical limitations that make him less than appealing for the starting job. That being said, he is the de facto starting quarterback right now with Hansen and Ballenger needing to outwork, out-think and out-lead him in practice this offseason. One thing is for sure, Hawkins work ethic will make Hansen or Ballenger earn whatever reps they get but the starting job is for the taking. Hopefully, Hansen and Ballenger reach their potential and make this a race that will give everyone confidence about the Buffs signal caller in '09.

An interesting comment in the article above from Denver Johnson via Mark Helfrich:

"It's not like we're watching film going, ‘If these seven things would have happened differently, we would have had a chance.' It's one guy here, one guy there. We're not that far away, but that's where your margin for error from a guy like Cody needs to be very, very tuned in. He needs to play very consistently and not perfect but near perfect to give us a chance. ... We want a guy who wants to play the perfect game and chase down that perfect game, and we can certainly do a lot to help him both as coaches and players around him."

I wouldn't say we were only drowning three feet off the dock. If that were the case, we would have seen something work on offense. Nothing worked last year when the Buffs had the ball. Many things and every position needs to improve from last year. I am just waiting for the day that someone comes out and says: "we were sh*tty last year, plain and simple. We didn't execute, coach well, play well, our energy level was down, etc." Sorry, but I just don't agree with the drowning three feet from shore statement. The Buffs were three plays away from being 2 - 10 last year, they weren't three plays from being 8 - 4.

Mike Bohn does a pretty candid interview with the Boulder Daily Camera about the perception of Colorado sports right now, particulary around men's and women's basketball. I think Bohn is a pretty straight shooter when it is all said and done. He gets perception. Now, like he says, winning is the perception. All the off the court stuff is nice and that is a good first step but turning the corner on the scoreboard is the obvious progression. It is going to be a very interesting year in 2009. It may be a deciding year for Colorado athletics for the next five seasons. A winning season from all three shouldn't exceed expectations next year. No excuses in 2009!

Rivals.com has released their rankings of the top 100 2010 recruits. Colorado prep QB Austin Hinder is ranked #76 and is a 4 star. Go get him Hawkins! Make it four straight years with the #1 in-state prospect committing to Colorado.

Just because basketball is over doesn't mean that there aren't other Buffalo squads for you to root on.  The Colorado ski team is in Maine today through Saturday competing for the 2009 National Championship.  The previous two times that Sunday River hosted the competition saw the Buffs take home the title so let's hope for the three-peat!

If you are looking for some Buffalo sports that you can actually attend this weekend, then go check out the tennis team as they start Big 12 action and try to take down both of the squads from the Sooner state.  Friday the Buffs go head to head with the Sooners and on Sunday Oklahoma State is in Boulder.  Hope for nice weather. 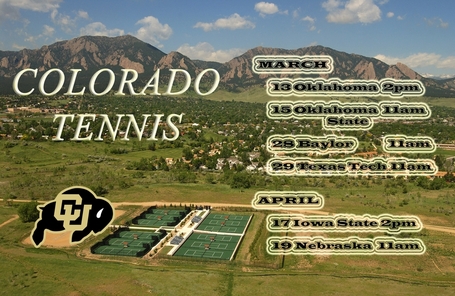