This link is a little old but Tim Griffin of ESPN does a good job talking about the issues now that Nebraska is faced with next year with QB Patrick Witt leaving. The only thing I am confused about is this statement, something I talked about last time:

The uncertainty likely plucks Nebraska from the favored role in the North Division, even with all of the other returning weapons the Cornhuskers have. Nebraska has a talented offensive line, strong running backs in Roy Helu Jr. and Quentin Castille, a dominant defensive player in Ndamukong Suh and an improving secondary.

But they also have only three real players at quarterback. None of them have any college game experience.

So losing a quarterback immediately removes them from Big 12 North favorites, especially a quarterback who played sparingly in  five games was going to get them over the hump? I would say "talented offensive line" is also a little strong in that they are going to lose two starters in the NFL draft. Like I said before, Suh and Helu must be world beaters because that is all I see carrying them to the Big 12 North title.

Neil Woelk states the obvious...the CU men's basketball team is headed for that #12 seed in the Big 12 tournament. I can't wait for the season to be over. It is getting hard to watch after the latest two beatdowns after it looked like the Buffs progressed.

Tom Kensler of the Denver Post says exactly what most of us our thinking. All of this "my team is soft" talk is a reflection on Jeff Bzdelik and his staff:

I don’t have a problem with a college or pro coach calling his team "soft." I’ve seen it used for years to motivate.

But Colorado men’s basketball coach Jeff Bzdelik must know that when he says that, it’s also a reflection on him and his staff.

Here is what Bzdelik said about his team after the Oklahoma State loss:

Coach Jeff Bzdelik openly questioned his players' effort and passion in his post-game news conference, which are getting more interesting with each loss. He called the loss "embarrassing" and called his team "a bunch of nice young men." That was not meant as a compliment.

I never thought I would see the Rocky Mountain News go away but today will mark the end of a 150 years. I will miss the Rocky Preps and the awards they gave out. 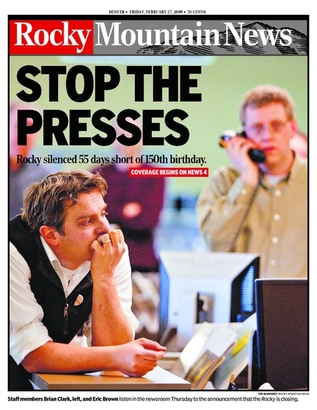