Share All sharing options for: Reviewing the Texas A&M Recruiting Class with I Am The 12th Man

Continuing our series of reviewing the Big 12 recruiting classes for 2009, today we will be looking at Texas A&M's second recruiting class under the Mike Sherman regime. We had both writers from I Am The 12th Man, James and Mike, provide us with answers to our questions about the results of this year's campaign. I would say Texas A&M was one of the surprise classes of the Big 12 considering their record last year but A&M always seems to have pretty decent classes since they are in a recruiting hot bed. In fact, according to the rivals rankings, Texas A&M has finished inside the Top 25 all but two years since 2002. 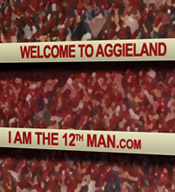 TRR: With some commentary, grade your coaches' performance this recruiting cycle?

James:  I give our staff a grade of B+. I won't give them an A because I thought we should have recruited at least one more QB, but I understand with the two-deep already set with Jerrod Johnson and Tommy Dorman already on campus, and a Ryan Tannehill available in an emergency, stud QB recruits aren't going to be flocking to A&M with no hope of immediate playing time, and staring at 3rd or 4th string on the depth chart.  I like our class because our coaches met our needs and brought in some terrific looking prospects, and they did it after a 4-8 season when our archrival went 12-1 and won a BCS bowl. That is some good recruiting.

Mike: I would give our coaches a solid A-. Coming off a 4-8 season, they were able to keep our class together with only one defector (Ivory Wade) and that was before the season started. That is the least amount of decommits we have had in recent memory. They landed a stud RB prospect. Only thing keeping them from getting an A+ was the inability to close on Tevin Mims or Craig Loston.

James:  We desperately needed an upgrade in speed, and help at every position on defense, and we got that, with 16 of our 28 signees playing or projected to play on the defensive side of the ball.    I'm a big believer in going after two sport athletes, guys who play footbal and run track or play basketball, because I want athletes who have some speed training, and we signed 6 kids who are also track athletes, and one who also played basketball. I believe in getting as much speed and athleticism for your team, because there are some things you can't teach, and speed is one of them.    We needed depth for our offensive line, and we signed 4 people projected to play OL, with one who may see significant time in '09.

Mike: We really needed to add speed to our team and add some talent on the lines. We signed 7 DBs, two of which could grow into speedy OLBs. We signed a LB who ran a 10.9 100 last year. We signed four OL, two of which I expect to see playing time in '09. We landed a RB/WR who ran a 10.7 100 at the 5A state track meet last spring. Our coaches ignored the rankings, and went out and got pure speed which is what I really appreciate.

James:  Coryell Judy: CB, juco recruit who is expected to see playing time immediately.    Christine Michael: Top RB in the State of Texas, should see playing time and be able to contribute the minute he steps on campus. Michael's power will be a nice alternative to the slashing running styles of Cyrus Gray and Bradley Stephens.    Aaron Arterburn: Kid chose to walk-on at A&M over scholarsip offers from Northwestern, TCU, and others, so you know you'll hear this story whenever he makes it onto the field. At 6'2, 215 lbs, Artburn is expected to compete for a spot at OLB the minute he steps on campus. He was a late find by the coaching staff, but apparently they are really, really excited about him.

Mike: RB Christine Michael is the jewel of the class. He will see playing time immediately. He won a national award from EAS for strength and speed. Coryell Judie is a juco cover corner who we brought in to compete for immediate playing time in the secondary. Patrick Lewis is an OG who should step into the two-deep at either guard or center. He was downgraded by coaches because he is only 6'1.5" but his play on the field is dominant.

James:  I'm not a huge follower of recruiting, so it might be better for me to leave this question for others, but I will say that I wanted Craig Loston, the safety from Houston Eisenhower who went to LSU. Anyone who will late-hit their own cousin (fellow LSU signee Russell Shepard) in a high school all-star game on principle alone has the nasty disposition I want on my defense. Loston would have been the perfect complement for Trent Hunter in our secondary.

Mike: Craig Loston is the best safety in the country and maybe the best DB overall. He could walk onto any campus in the country and play CB or safety immediately. Unless he gets injured we will watch him play on Sundays. He committed to A&M as a junior, but decommitted after we canned Fran. Our 4-8 record kept us from landing him. Tevin Mims was the type of impact pass rushing DE we needed to land. He always wanted to be a t-sip and when tu finally offered, he jumped on it.

James:  I really like Ryan Swope, a RB from Austin Westlake HS. Swope is 6'0, 195 lbs, and has been timed at 10.7 in the hundred meters. We project him as a wide receiver, and I think he is a good enough athlete to really be a difference maker for us.

Mike: Dustin Harris from 2A Livingston HS. He played QB and had offers from Utah and Montana St before attending the A&M summer camp where he played CB and earned an offer. He runs a 10.8 100 and high jumps 6'6." He is a bigtime athlete and a bigtime find for Sherman and co.IMO he will be the perfect example of why the stars and rankings do not matter.

TRR: I know it's early, but what are the biggest needs to be filled with the 2010 recruiting class?

James:  Well, obviously, since we didn't take one this year, we need to take a QB or two in the next class. We already have Jameill Showers, a dual-threat QB from Killeen Shoemaker committed, and I expect us to take another one. Also, regardless of inherent need, I always think we should take  3-4 OL and 2-3 DL in every class, just on principle, so depth is never a problem.

Mike: We need QBs, more speed accross the board, and more OL and DEs. If Billy Chavis moves to DE and Andrew Weaver grows into a DE, we may not need a lot of DEs next year. Right now, we do not know where our pass rush is going to come from. I think it is important for A&M to go to a bowl game and for Sherman to land some of the bigger name recruits this year. We need to land a Lache Seastrunk or Jackson Jeffcoat.