Reviewing the Kansas State Recruiting Class with Bring on the Cats

Share All sharing options for: Reviewing the Kansas State Recruiting Class with Bring on the Cats

Continuing our series of reviewing the Big 12 recruiting classes for 2009, today we will be looking at Kansas State's first recruiting class of the second Bill Synder era...if that makes sense. Bring on the Cats was gracious enough to answer a few questions about the results of this year's campaign. You have to take notice of Kansas State's classes because the JUCO influx as most of these guys come in and have to contribute day one. 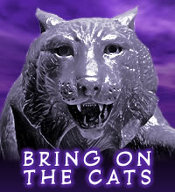 TRR: With some commentary, grade your coaches' performance this recruiting cycle?

BOTC: Because the recruiting this year was a whirlwind, I'd say they did alright in terms of balancing out the roster and picking up players at positions of need.  If we care about what the recruitniks say, they probably didn't do the best job of grabbing highly recruited players.  However, that's not to say the kids they recruited are bad football players; we simply don't know.

I know it's probably cliche for a KSU fan to say, "Ratings be damned," but I don't say that because I have some sort of near religious faith in our coaches.  I just say it because I don't think recruiting gurus (specifically football) really know what they're talking about.  The rating systems are so flawed and subjective that it's hard to take them seriously.

BOTC: K-State needed safeties, and they got a slew of them.  So, in that sense, it was a big success.  They needed defensive tackles, and they didn't get any of them.  They needed running backs, and they got a couple nice prospects.  A really nice looking quarterback prospect would have been nice, but they seemingly struck out on four or five really good looking targets before settling on a lesser recruited, albiet very athletic, undersized prospect out of Georgia.

Honestly, it was hit or miss across the board.  They did really "well" at a couple of spots and really "poorly" at some of the others.  In a way, it was kind of the usual for a Bill Snyder class.

BOTC: John Hubert (RB), Carlton Callender (DB), Andre McDonald (OL).  Hubert is a very nice looking running back out of Waco, TX.  He rushed for 2,800 yards and 41 touchdowns his senior year.  Those are numbers to get excited about.  Assuming that Bryce Brown doesn't ultimately come to KSU, you'd have to assume Hubert will be in the mix from day one.

Carlton Callender is a nice safety prospect out of Miami, FL.  He has good size, speed, and boasts offers from Lousivlle, Pitt, and West Virginia.  While those aren't mind-boggling offers, it's immensely better than fighting with Northern Iowa and [Insert FCS School] for recruits.  He had one of the better offer lists of our recruits, so I assume he's probably a good player.  I don't know though; just speculating.

Finally, Andre McDonald, Choctaw, OK, is a 6'8" TE/OL prospect that really has freakish size and athleticism.  It's not often that you cross a kid that size who has the speed and footwork to legitimately be a tight end at this level.  And, if the coaches aren't interested in that experiment, he makes a heck of a tackle prospect.

BOTC: Well, I guess if I had to speak for myself, I'd have to say that Raymond Cotton (Ole Miss) was one that got away.  I'm not sure how interested he was in KSU, but he chose Ole Miss over KSU about a week ago.  After watching some of his Elite 11 video, he would have been a perfect fit for the kind of offense Snyder wants to run at KSU, and he had an absolute cannon for an arm.  Seeing him go to Ole Miss, where he'll most likely sit behind Jevon Snead for a couple of years...well, it's hard to stomach.  We sure could have used a prospect like that.

BOTC: KSU signed a kid named Kadero Tarrell out of Garden City Community College, and he hasn't played a down of football in two years.  Apparently, in high school, he was all-state in both football and basketball, so he's a heck of an athlete.  He also passes the eye test (for those that have seen him in person).  However, you have to wonder about a kid that was unable to make the twelve man out-of-state roster at GCCC two years in a row.  If he gets adequtate coaching, and they are able to squeeze some potential out of him, he could be a heck of a player.  If not...well, it will be a puzzling keeper from Prince's last recruiting class (as he was originally a commitment of the former coaching staff).