Preview: Colorado Buffaloes Take On the Gonzaga Bulldogs In the Maui Invitational

Share All sharing options for: Preview: Colorado Buffaloes Take On the Gonzaga Bulldogs In the Maui Invitational

The always prestigious preseason tournament, the Maui Invitational, kicks off tomorrow with the Colorado Buffaloes taking on the Gonzaga Bulldogs, a top five program in terms of wins over the past decade. Gonzaga has won 9 consecutive regular-season conference titles and has reached the NCAA tournament in nine consecutive years as well, something only nine schools have done over that time period. Now recruiting with the best of them in college basketball, the Gonzaga Bulldogs are a true perennial power, not just a nice story. 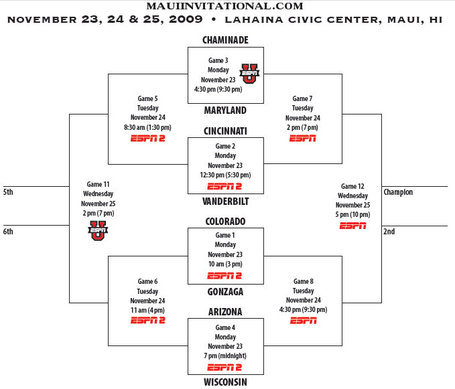 preview after the jump...

The Gonzaga Bulldogs are 2 - 1 in the early season with home wins against Mississippi Valley State and IPFW. The one loss was on the road to the #2 ranked Michigan State Spartans 75 - 71 in a game which they led until three minutes remaining. If you watched the game, you will have noticed three things. The Bulldogs are very talented, are playing a different style of basketball more conducive to the physical style of play they will see at tourney time and you may have needed a roster to see who all of the new players were. Amazingly, Gonzaga stuck with Michigan State after losing five seniors off of last year's team - F Ira Brown, F Austin Daye, G Micah Downs, F Josh Heytvelt, G Jeremy Pargo. Austin Daye was a first round draft pick in the 2009 draft while Downs, Heytvelt and Pargo were starters along with Daye for much of the year and all four were in the top five of the team in scoring. This off a team that went to the sweet sixteen a year ago. Because the Bulldogs were such an experienced team in 2009, Gonzaga has four upperclassmen and twelve underclassmen including nine freshmen. Five freshmen play and make solid contributions for this team. But don't expect much of a drop off from the Bulldogs as you can already tell, they have enough of a talented nucleus to be a contender, just ask Michigan State.

The two top returning players from a year ago is Colorado high school product, G Matt Bouldin and G Steven Gray. Matt Bouldin, a front runner for the West Coast Conference player of the year, leads the team in scoring this year with 17.3 points per game. The biggest difference between last year's team and this year's team is the early front court play from sophomore Robert Sacre (7'0"), freshman Elias Harris (6'7"), freshman Kelly Olynyk (7'0") and senior Will Foster (7'4"). Robert Sacre, hurt last year, has averaged 16.3 ppg and 7.0 rpg. His presence is a big improvement inside from a year ago when even Bulldog fans would admit that players like Heytvelt and Daye became too perimeter oriented. Sacre and Harris have truly solidified the post position on this team. If you are fortunate enough to watch the game tomorrow, you have to check out Elias Harris, a freshman from Germany who sort of flew under the radar in the recruiting circles but has Gonzaga fans salivating. A silky smooth player in the mold of Amare Stoudemire, he has come in and averaged 14.3 points per with seven rebounds.

This team might also have more depth compared to a year ago, especially with Sacre and Harris now available, which is making the Bulldogs more competitive on the defensive end, something Gonzaga fans have always wanted to see more of. If their past performances are indicative of the future, expect the Bulldogs to really get after the young Buffs on the defensive end.

As for the Colorado Buffaloes, this game will be a pretty big challenge for them. Gonzaga, although they have one loss, will probably be ranked when the polls come out tomorrow because of their impressive performance against MSU. Where the Buffs might have the most trouble is in the post where Sacre, Harris, Olynyk and Foster are all bigger and more talented than the Buffs down low. The tallest person on the Buffs top five is Austin Dufault who stands 6'9". True freshman Shane Harris-Tunks goes 6'11" but has only averaged 8.0 minutes a game. It will be interesting to see how the Buffs try and defend the Bulldogs. You will probably see a lot of zone as my guess is the biggest threat from the Zags is their penetration game and less on the perimeter as Steven Gray is their only bona fide perimeter shooter but he has struggled shooting only 40% from the field and 35% from the three point line. The biggest question for the Buffs the past three years has been its rebounding and that has come into question again this year as they were out-rebounded 31 - 23 by Texas Southern, who the next day went up and lost to University of Northern Colorado. The Buffs shot over 60% in that game to win but unless the Buffs hit the boards hard on Monday against the Zags, it could be a long day. Colorado averages 29 rebounds a game with junior college transfer Marcus Relphorde leading the Buffs with just 4.0 rebounds per game.

Tomorrow's game does have the potential for some great matchups, though. The best in my eyes is Gonzaga star Matt Bouldin against the Buffs' star Cory Higgins. Higgins is once again proving he is one of the best players in the Big 12, averaging 23.3 ppg and shooting an amazing 70%. Bouldin is a very physical guard who uses his strength to create shots. It will be a good battle of strength vs. speed. Another matchup that will be exciting is Buffs' freshman G Alec Burks against G Steven Gray. Gray is the Zags best perimeter threat. Alec Burks is averaging a strong 18.0 points per, a great number for a guy playing for the first time at the collegiate level. If the Buffs can out play the two perimeter players in Bouldin and Gray, they might be able to make things interesting tomorrow. I am very excited to see how Burks plays tomorrow in his first look at strong competition.

I am very worried about the matchups elsewhere on the court. Colorado G Nate Tomlinson will face a very tough and quick guard in sophomore Meech Goodson, who likes to push the pace and play tough defense on the perimeter. Look for more Dwight Thorne, Cory Higgins and Alec Burks to play the point tomorrow as well. One of the reasons the signing of Marcus Relphorde got Buffs' fans excited was his athleticism at 6'8" and his self acclaimed ability to guard four positions on defense. He might have to do that tomorrow and do it very well for the Buffs to have a chance when freshman Elias Harris is in the game. This will be a good barometer for Relphorde and I hope the coaching staff puts Relphorde on him as soon as he steps on the floor and tells him it is his job to make the freshman's life miserable.

As for the post position, your guess is as good as mine as to what the Buffs will plan to do but you can bet Gonzaga goes to the post often tomorrow. If Colorado can get Harris and Sacre in foul trouble, which is what Michigan State did to beat the Zags, CU will have a much better chance tomorrow, that and if they make it a goal to crash the boards.

It should be a fun watch and a great gauge for the young Buffs' team.