The Colorado Buffaloes compounded a win against Texas A&M last weekend into five verbal commitments, giving them a total of 12 in the 2010 recruiting cycle. Just to give you some perspective of where the Buffs are in the recruiting game compared to last year, on this day in 2008, the Buffs were receiving a verbal from their fourth total commitment in DT Nate Bonsu, so Colorado is much farther along than they were last year at this time.

The two most recent commitments are TE Justin Favors and Ath Donnie Duncan. Below are some player profiles: 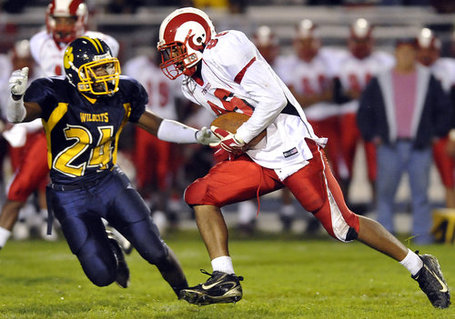 Commentary: Favors is from the same high school as current Buff LB Doug Rippy. Coming into the 2010 recruiting cycle, tight end was certainly a need for Colorado. With only two scholarship players returning next year in redshirt freshman DaVaughn Thornton and junior Ryan Deehan, the Buffs have received a verbal from Colorado prep Kyle Slavin and now Favors. Those conditions were certainly on Favors' mind:

"What I liked best (about his visit to Colorado) was the game. I liked the atmosphere and the campus. And the players welcomed me in," Favors said. "They are graduating six tight ends. They need tight ends to come in. They told me I've got a chance to play next season if I work hard."

According to ESPN.com, "Favors is a productive tight end in the passing game. He has solid size and looks on film to carry good bulk. He has good hands and displays the ability to consistently catch the ball with them and bring it in to his body. He displays the ability to go up and get the ball and extend his arms to make a catch. Displays good concentration and the ability to track the ball. He has solid straight-line speed, but is best suited for the short-to-intermediate passing game." The Dayton Daily News calls him a tremendous receiver and blocker.

Dave Berk of Scout.com thinks that if Favors was a couple inches taller, he would be a top tight end recruit. Some sites have him listed at 6'2", some have him as tall as 6'5":

If Justin Favors was just a couple of inches taller he'd be one of the top tight ends in the country.  But standing just about 6-foot-2, 212-pounds he often gets looked over.  A skilled receiver who knows how to get open and make the catch, Favors would be a perfect fit in a flex tight end position.  In the season opener Favors pulled down 6 passes for 105 yards.

Favors has done a good job getting video of himself out on the internet. Here is one of him at an Ohio combine. Go to the site to see him do other drills, below he is running some routes. He is certainly a big kid and shows that he has some pretty good athleticism:

JJHuddle.com ranks Favors as the 18th ranked athlete in the state of Ohio.

According to the BDC, Favors still will take other visits to Syracuse and Louisville although he verballed to Colorado. Favors also plays basketball.

Below is some more video of Favors on the football field from scoutingohio.com:

see after the jump for a profile of Donnie Duncan

Commentary: Talk about a kid with a smooth stride with no wasted movement. Very solid highlight video. Donnie plays both sides of the ball at wide receiver and defensive back. From his highlight film, he looks to have outstanding body control and is instinctive. Duncan was named to the ESPN CalHi Preseason All-L.A. City Section Team earlier this year:

WR -- Donnie Duncan (Hamilton, Los Angeles) 6-0, 175, Sr.
The Yankees' top player was a second team All-City selection by coaches as a junior and should enjoy another banner year in 2009. Duncan also displayed solid ability at a Nike Combine in Los Angeles this past spring, recording a 73.23 SPARQ Rating. His individual marks included a digital 4.62 forty, a 31-foot Power Ball toss, a 32.9 inch vertical jump and a 4.68 20-yard shuttle.

According to the Denver Post, the athlete has 8 total touchdowns this year:

Duncan has caught six touchdown passes this season and has returned two interceptions for touchdowns. His other top offer came from Washington State.

"Colorado said that if I went there, I could compete right away as a freshman," Duncan told Rivals.com