Share All sharing options for: Buffs to Welcome Five Visiting Recruits/Commits This Weekend

The Ralphie Report takes a look at the five recruits and commits coming into town this weekend for the Missouri game. Right now, the Buffs aren't sitting that bad on the recruiting front, considering the results on the field. Last year at this time, Colorado only had three commitments. This year, they are at seven and don't forget about transfer WR Toney Clemons when you are thinking about the new talent that should hopefully be in Boulder next year. Colorado has three four-star athletes signed (counting Clemons) and the rest are three stars. Two of the Buffs seven commits will be visiting Boulder this weekend, QB Nick Hirschman and DE Chidera Uzo-Diribe. Another highly touted player comes to Boulder from across the country and he brings with him a lot of accolades: 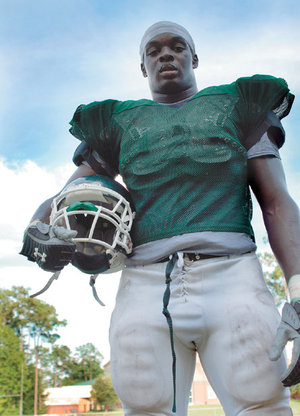 Commentary: Justin Parker has emerged as one of the top inside linebackers this recruiting cycle. He was named to the Sporting News Today's list of top 100 football recruits for the 2010 class. Back in May, The Beaufort Gazette had this to say about Parker: "(He) made 97 tackles for the Eagles last year, six for losses, and forced two fumbles, recovered one and intercepted one pass. He was a first-team pick on the Beaufort Gazette/Island Packet All-Area Team as a junior." According to scout.com, as a junior, he was named 1st team All-State, 1st team All-State by HSSR, and 1st team All-Lowcountry. As a sophomore played outside linebacker and made eight interceptions during the season. Named 2nd team All-Region.

This season, Justin Parker is the team's leading tackler with 92 total hits. He also has eight tackles for loss and five sacks.

The rosters for this year's Shrine Bowl game were released Thursday and it comes as no surprise that Beaufort High's Justin Parker, considered by many to be the state's top linebacker prospect, was among the fortunate 88 players selected.

But Parker got another bit of good news on Thursday morning when Eagles coach Mark Clifford told him that he had also been selected to the 2010 Offense-Defense All-American Bowl. This celebrated all-star game pitting 40 of the nation's top high school seniors in a East-versus-West format will take place on January 2 at Coastal Carolina University.

Recruiting guru, Tom Lemming, likes the Beaufort linebacker a lot: "The Palmetto State's top linebacker in 2010 will be Beaufort's Justin Parker. "He gets to the ball in a hurry, and has no wasted motion," Lemming said. "I like him a lot."

The experts and Sporting News Today seem to think Parker will follow the lead of Devin Taylor, Jimmy Legree and Duane Chisolm and stay close to home. Here's what the publication had to say: "Outside linebacker has Clemson and South Carolina all over him; would be a surprise if he left his home state."

Parker talked about his wish to visit Boulder, Colorado this weekend. Scout.com and ESPN has him visiting while rivals.com does not. He will also visit South Carolina on November 13 and already visited Clemson:

I actually contacted Colorado about taking an official visit there later this month, but I still haven't heard back from the coaches yet. If he gets back to me, I'm pretty interested in getting the feel for an out-of-state school. Colorado's been pretty consistent about staying in touch with me and sending me mail, so it couldn't hurt to check them out.

In another blog post that he does with the Gazette, he said this about distance being a factor in his college choice when discussing a Nebraska recruiter that came by the school:

I know that I mentioned how one of the Nebraska coaches came to visit me at school the other week, which really surprised me. We talked for about three minutes and it was nice to see that they would go out of their way to check on me. But the only thing with Nebraska is that it's pretty far away from my family, so I'm taking all of that into consideration.

He also said that his top five schools as of October 14 were Clemson, South Carolina, N.C. State, Wake Forest and Virginia Tech.

Sounds like a long shot but the kid is definitely a player and at least we got him to visit. 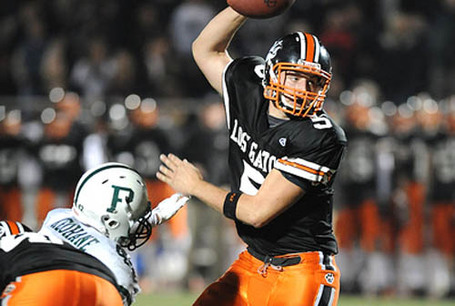 Commentary: Nick Hirschman committed to the University of Colorado on June 24, 2009. We are very excited about the prospects of Nick Hirschman in a Buffs uniform. We have covered Hirschman a lot on this site including an interview with him a couple months ago. See the following links for more on Nick, especially the interview:

Here is Nick's most recent accolade:

There has been a long line of quality quarterbacks that have come out of Los Gatos under coach Butch Cattolico, including Trent Edwards of the Buffalo Bills and Danny Sullivan, now starting at Arizona State. But none of those strong arms ever threw for 400 yards in a game, like Hirschman did in approximately two and a half quarters of play in a 47-0 win over cross-town rival Saratoga on Friday. Hirschman threw for 413 yards, completing 12 of 17 passes with five touchdowns. "I've been coaching here 34 years, and we've never had someone throw for that many yards; I believe it's a school record," Cattolico said. Hirschman had scoring strikes of 49, 52, 70, 69 and 13 yards. He hooked up with Andrew Berg seven times for a school-record 247 yards with four scores. Hirschman, who has committed to play at Colorado next season, has completed 87 of 119 passes (73 percent) for 1,719 yards with 22 touchdowns and no interceptions. The Wildcats play at Palo Alto on Friday night.

A little video from a game this year between Hirschman's Los Gatos team and Mountain View: 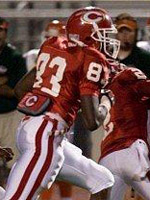 Commentary: Chidera Uzo-Diribe committed back on September 20th to the University of Colorado. It is his only known offer at the time but he plans to take visits to other schools if he gets other offers and his commitment is considered pretty soft at this time. According to rivals.com's player page, Chidera's only offer came from the Buffs but he was being courted from Nebraska, Arizona, UCLA and Fresno State. Why only one offer? He has a worthy excuse. Chidera has played in only one high school football game because he is a converted basketball player. Last year, he was added on the team late and only played in one game but his athletic ability and impressive work in summer camps has brought him a pretty big buzz.

Rick Kimbrel of Yahoo! rivals.com also weighed in on Chidera

The 6'3" 220 pound end/outside linebacker camped with the Buffs this summer and impressed enough to land his only offer. Many teams are probably waiting on more film to evaluate Chidera, who is still considered a project but his athletic ability makes him valuable. It will be interesting to see what other programs start offering Uzo-Diribe after they get some more information on him.

While everybody is well acquainted with Corona, Calif., high school’s two four-star prospects running back, Jordon James and defensive back Demetrius Wright, but there is another prospect from Corona who is beginning to join the party in sleeper defensive end, Chidera Uzo-Diribe (6-4, 225, 4.75). Uzo-Diribe is mostly being recruited as a defensive end, but he may also log some time at outside linebacker in 2009. The reason why Uzo-Diribe is a sleeper is because he was playing basketball as a junior, but now he knows that football is his ticket for his future. Even though, Uzo-Diribe didn’t play a down of football as a junior, he still has racked up an offer from Colorado after a standout performance at Colorado’s full contact camp. The thing the Buffaloes liked about Uzo-Diribe was his quickness off the edged and his ability to put heat on the passer. He also displayed an outstanding nose for the football at the CU camp. "I felt good getting an offer from Colorado," Uzo-Diribe said. "It was the goal that I wanted to accomplish at the camp. 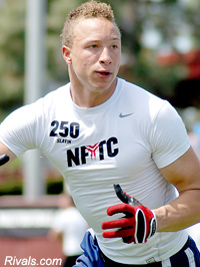 Commentary: Tyler Slavin looks like a pretty interesting prospect who is getting a lot of attention from a few elite schools. Rivals.com has him visiting Boulder this weekend, scout.com does not so we will have to see on gameday. Originally born in Denver, Slavin does well getting off the line of scrimmage and seems strong catching the ball in tight spaces. He runs the vertical route very well and is physical enough to make contested receptions. His top five schools or at least the schools he will be visiting are Arizona, Washington, Colorado, Nebraska and Northwestern. According to the scout.com player page, "Tyler Slavin only played in six games during his junior season because of a broken hand, but still finished with 22 receptions for 501 yards and eight touchdowns. He says he can bench 265-pounds, squat 405 and has a 38-inch vertical jump." ESPN.com says "Slavin has excellent hands. He has a nice upside to him because of his overall athleticism and skill level." Slavin seems most interested in Arizona, Washington and Nebraska at the moment but hopefully the Buffs staff can jump into that top three. He should be able to look at the depth chart and see the Buffs could use his help at the wide receiver position.

Commentary: Palelei was first offered by the Colorado Buffaloes this time last year and has always expressed interest in the Buffs. Earlier this year, Palelei committed to Stanford University but he has since decommitted because, as he puts it, "he had fallen out of touch with Stanford." After he decommitted the Buffs along with schools like Oregon started to talk again with Palelei. Palelei is a tall, rangy kid on film and looks like he can create some good pressure off the edge. His high school team has him play in that rush end/outside linebacker position in the 3 - 4. Evan's high school team Bishop Gorman is 9-0 record this season with the defense only allowing 43 points this year. Palelei is the son of former UNLV offensive lineman Lonnie Palelei, who played for four NFL teams between 1993 and 1999. His Bishop Gorman team is full of division one players, their coach thinks fourteen athletes on the team will make that jump to the next level. He is a three-year starter at Gorman which is impressive considering the level of talent on the team.

According to scout.com, Palelei had 45 tackles and two sacks as a junior. Here is how he described himself back in April:  "I do my best to play hard every down," said Palelei, who reports an unofficial 4.7 forty. "I’m fast: I like to use my speed a lot and I stay square to the ballcarrier pretty well. The position they’re recruiting me for [strongside linebacker] is the same position I’ve been playing for the last two years in high school, so I’m familiar with it."

Here is a short bio on Palelei from Athlon Sports:

Evan Palelei, WLB (6-3, 230)
Evan is projected as an outside linebacker but has played plenty of ball along the offensive line. With those two positions on the resume, toughness should not be an issue with this kid. He also has a genetic advantage over most kids in that his father, Lonnie, played college ball at both Purdue and UNLV before being drafted by the Steelers in the 5th round of the 1993 NFL Draft. His older brother, Po'u, played offensive line for the Gaels and earned himself a scholarship from Arizona State in the '07 recruiting cycle. Palelei is currently committed to Stanford and, with eyes on an architectural engineering degree, is clearly a heady player.

[Coach Tony] Sanchez' take: "He comes from a football family where his dad was a 7-year NFL vet and plays like it. He is incredibly coachable and understands the game extremely well."

Here is a short video of Palelei talking about this football goals, NFL role model and a few other things.