Share All sharing options for: Film Session: The Game Winning Touchdown Against Kansas

My favorite play of the Kansas game and it just shows you that if this team executes, beautiful plays can follow. This run features three blockers - TE Riar Geer ( the star of the final drive after the false start penalty on the first play), OT Ryan Miller and OG Matt Bahr - who perform their tasks perfectly, giving Rodney Stewart a wide open hole for the go ahead touchdown. 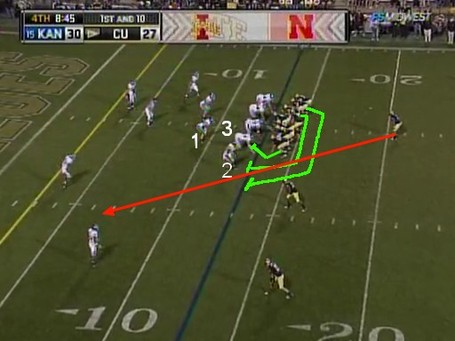 The Buffs line up in a double tight end formation with twins to the left. Kansas comes out in their base 4 - 3 set but shade their linebackers and safeties over to the strong side of the field (towards the bottom of the screen). The play call is an off tackle handoff to Rodney Stewart towards the bottom of the screen. Both the backside guard and tackle, Matt Bahr and Ryan Miller, are pulling to escort Stewart through the hole.

Riar Geer has the most important block to get the play going. The bottom tight end, his job is to outside release and get his head on the outside shoulder of the defensive end across from him and move him towards the middle of the field. If he lets the defensive end get outside of him or push him up field, one of the pulling offensive lineman will have to double team the defensive end leaving a Kansas defender unaccounted for. Riar Geer has the defensive end (#3), Matt Bahr will pull around and have responsibility for the first man who cross the line of scrimmage which will be the outside linebacker (#2) and Ryan Miller will have the next guy to cross the line of scrimmage and show his face which will be the middle linebacker (#1).

Riar Geer may have the most important block at the point of attack but if the other three lineman don't handle their players, the play is shot and the pulling guard/tackle will have to change their plan and help out. Fortunately, for the Buffs everyone else on the line does their job...and it is a well executed play. 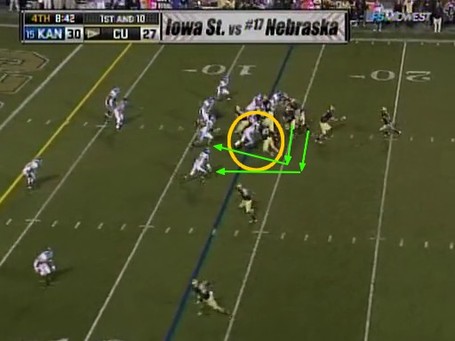 A little hard to see but look at Riar Geer in the yellow circle. That is a picture perfect seal block, shielding a collapsing defensive end and pushing him back into the middle of the field with Geer keeping his back to the hole where Rodney Stewart needs to go. Just a great job. As expected, you can see how the play is shaping up. Matt Bahr and Ryan Miller are pulling from the backside of the line (top of the screen) and the first two players in the hole, just as you draw it up, is the outside linebacker and the middle linebacker. As an offensive coordinator, you love the matchup: Two on two for the score as Riar Geer and the rest of the offensive line did their job. 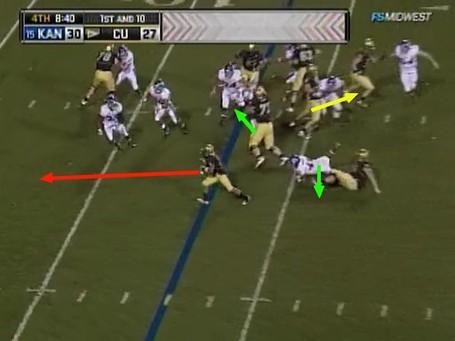 As you can see, Matt Bahr takes down the outside linebacker and Ryan Miller seals the middle linebacker, creating a great hole for Rodney Stewart to work through. Look at Riar Geer (yellow arrow). This is why a few people believe he can be an NFL prospect. That is a defensive end who he just manhandled. He is still engaged and blocking him away from the play well after Stewart passes him. That is a big time block by a senior and a captain.

Touchdown Buffs. Great to see this sort of execution late with the game on the line. They were in the redzone, smelt blood and dominated up front.