Part two of the Film Series breaking down last week's game takes us to the second of three third down conversations on the Buffs' go-ahead drive midway through the fourth quarter. The first play we looked at was successful because of Tyler Hansen's ability to create something out of nothing and Riar Geer's savy to find a hole in the zone on 3rd and long. This second play was offensive coordinator Eric Kiesau dialing up the perfect play call for the situation with QB Tyler Hansen making a good read on the defense and TE Riar Geer running a quick turn-in route to perfection. 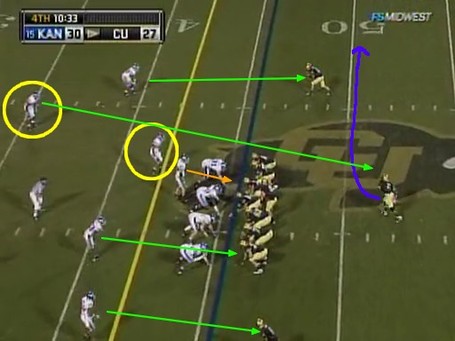 The Buffs come out in a double tight formation with TE Riar Geer  lined up at right end and TE Ryan Deehan lined up at left end. RB Darrell Scott is the lone running back with wide receivers split to both sides. Unlike the last third down, the Jayhawks line up in a more agressive look. Still in their base 4 - 3, the middle linebacker (orange arrow) creeps up to the line of scrimmage to show a five man rush. The other two linebackers are split man-to-man in coverage responsibility against the tight ends, the two cornerbacks are man-to-man on the receivers and the top safety has running back responsibility (green arrows).

Hansen sends Darrell Scott in motion to the top right which opens up the middle of the field. 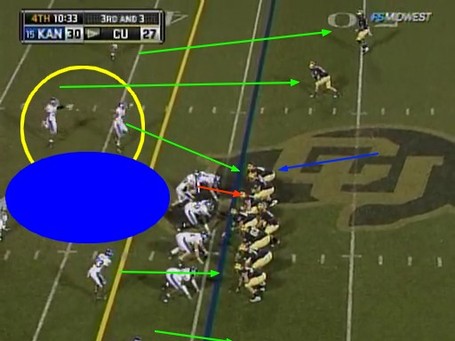 Now in an empty set, the Jayhawks get confused on who has coverage on the motion man out of the backfield (yellow circle) as both the left outside linebacker and safety walk out against the slot receiver as the top corner shifts over on Scott. The confusion leads a big void in the middle of the field (blue circle). Tyler Hansen and Riar Geer (blue arrow) reads this and the play is off to a good start. 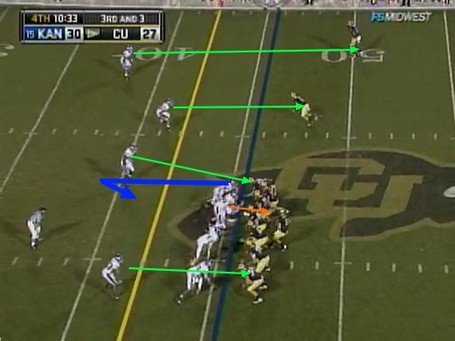 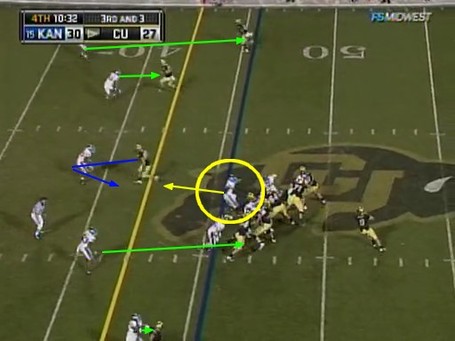 But not everything is as it seems. The Jayhawks attempt to confuse the young quarterback and offensive line, dropping an interior lineman (yellow circle) into the throwing lane. The defense is hoping that the jammed receivers on the outside with a lineman temporarily occupying Geer's throwing lane would cause Tyler Hansen to panic and disrupt his rhythm on third and short. A play that seemed to be a easy first now requires some patience. 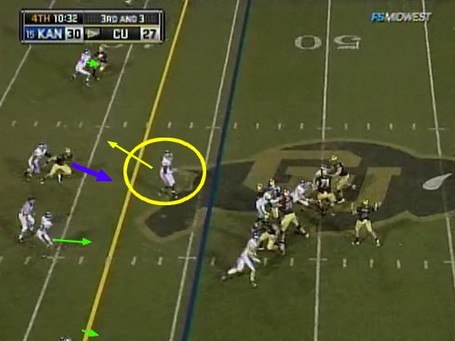 Geer is successful in getting the linebacker shielded from the ball (blue arrow) but the interior lineman is still in his back peddle in the throwing lane for Tyler Hansen to make the throw to Riar Geer. Tyler Hansen now has to wait for the "window to open" as quarterback coaches preach. Geer will continue to work back to the ball (blue arrow) keeping that shield between he and the linebacker while the defensive lineman will continue to look at Hansen while dropping, not knowing where Geer is (yellow line). The pass protection is solid and Hansen has the time to wait for the "window to open" and let the dropping defensive lineman clear, delivering a perfect pass to Riar Geer, two yards behind the line to gain. 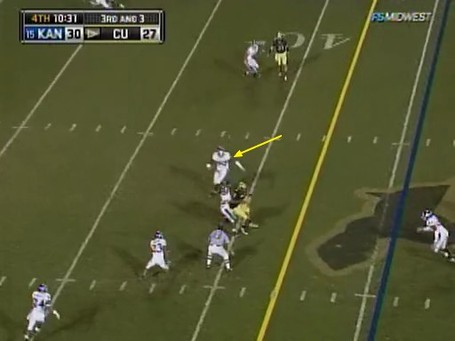 See where the defensive lineman ends up (yellow arrow). He is three yards outside and two yards behind Geer when the ball is delivered. Good job by Hansen to read the defensive scheme and deliver a good ball to Geer who successfully shielded his man for another third down conversion

Good play call here and better execution by Hansen to not put the ball right in the stomach of a dropping defensive lineman.