Film Session: The Game Winning Drive Against Kansas, Play One

Share All sharing options for: Film Session: The Game Winning Drive Against Kansas, Play One

I had to go back and breakdown the drive that allowed the Colorado Buffaloes to take the lead in the fourth quarter, highlighting the special third down plays that QB Tyler Hansen was able to complete in only his third start of his collegiate career. Special props to Burnt Orange Nation for the idea of breaking plays down with screen shots from the game.

The Situation - Colorado just went behind 30 - 27, 13 minutes left in the game. Riar Geer gets flagged for a false start on first down, backing the Buffs up to the 19 yard line. Two incompletions follow and the Buffs are now in deep trouble. A punt here gives a hot Kansas offense the ball back with great field position and a chance to extend the lead to two scores with minimal time remaining in the ball game. The Buffs need a play on 3rd and 15. 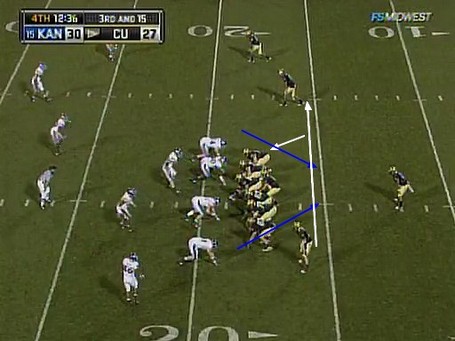 The Buffs come out in a strong (tight end lined up to the left) slot left formation. The Jayhawks show a base 4 - 3 and they only bring four linemen on the pressure, understandable considering the Buffs have to get 15 yards and Kansas looks to be dropping their linebackers for coverage. WR Scotty McKnight is lined up towards the tight end on the bottom of the screen and will come in motion. The play was initially called to run McKnight in motion run from left to right, use the top wide receivers  to run off the corner backs to create space and find the void underneath for McKnight to get up and make a play. But the play breaks down early as Hansen wanted to roll right with McKnight on the play action fake. Their is a miss-communication up top with Ryan Miller at tackle and Matt Bahr at guard as they both block down, leaving the Kansas left defensive end Jeff Wheeler unblocked and unaccounted for. This may have been by design to get the end up quickly and allowing McKnight to run freely underneath with a quick flip pass over the top but usually you chip that end so the QB can get his head around on the playaction pass. Jake Laptad, the right Kansas defensive end tries to meet Wheeler in the backfield pushing Nate Solder towards Hansen. 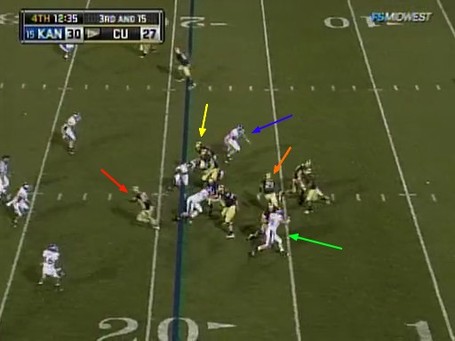 Hansen goes on the play action fake, McKnight (orange arrow) goes across the field to make the catch in the flats. You can see the top left outside linebacker for the Jayhawks would have made a play on McKnight if the ball went to him. Matt Bahr and Ryan Miller release down (yellow arrow) leaving Wheeler (blue arrow) well up field as Hansen is finishing the play action fake. TE Riar Geer (red arrow) releases upfield while DE Jake Laptad gets a good up field push on Nate Solder (green arrow). 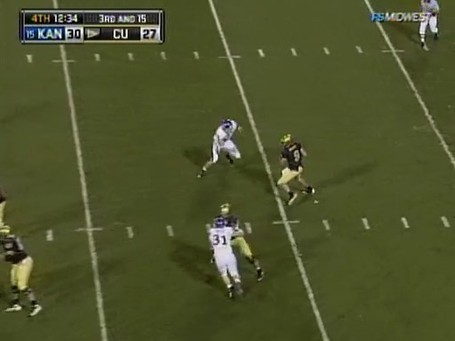 The play looks shot with Wheeler getting up the field and many of the options gone as the play was designed to go to McKnight and certainly towards the right side of the field. 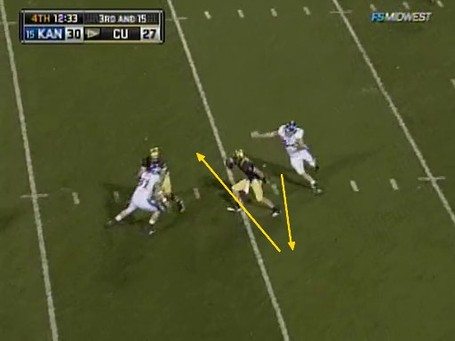 Time for Hansen to make a play. He makes a quick jab step to the left, freezing Laptad and sliding underneath Wheeler, extending the play and moving to the right. This is the bonus of having Tyler Hansen in the game, this sort of athletic ability that can potentially save a game. The play is now in playground mode and the Buffs are exactly where they started, still needing 15 yards but now everyone needs to improvise to make it happen. Hansen quickly regroups and focuses his head back up the field. 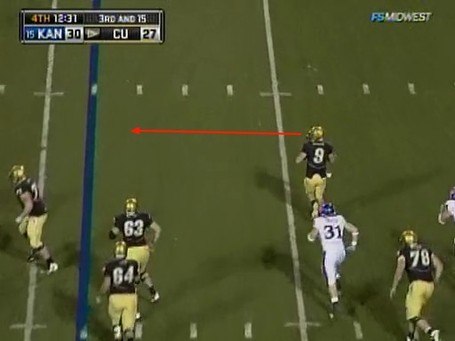 Moving to his right, Hansen shows good mechanics and delivers a strike up the middle to a backside receiver in TE Riar Geer between three would be defenders. Geer makes a great run after the catch the Buffs get 29 yards to the Kansas 48 yard line. 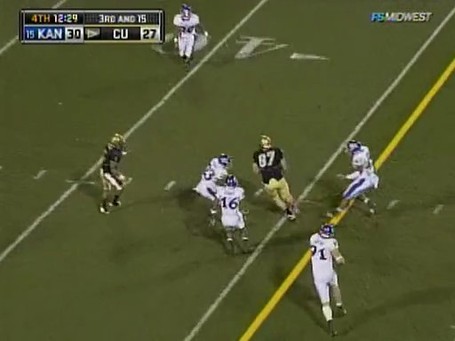 This was the first of three third down conversions orchestrated by Tyler Hansen on this game deciding drive. Not bad for a player with three starts.

Tonight, I will breakdown two other crucial plays from this drive, another completion to Riar Geer on third down where the Jayhawks dropped an interior lineman right into the passing lane and Hansen did a great job letting Geer clear the defender to get the ball to him in the window. The final play will show you the game deciding touchdown where Matt Bahr and Ryan Miller make up for the mis-communication above, pulling to the left side of the formation and clearing a hole for a 13 yard Rodney Stewart touchdown run.

There was definitely some offensive growth from the Buffs on this drive.