Share All sharing options for: 2009 BCS National Championship Case Study - When the Outcome is Already Decided

I wanted to put this out there before this evening's BCS National Championship game, but I haven't seen the public opinion so heavily one sided in a game of this magnitude in a very long time.  Vegas says that the Florida Gators are 2.5-3 point favorites over the Oklahoma Sooners this evening (the line has since been fluctuating a bit higher but that is due to the money being placed on the game, not Vegas' perceptions of the teams) and I have to believe that at least one of those points is due to the fact that Florida will definitely have some sort of home-field advantage tonight.  I know that Vegas creates lines to influence the equal distribution of dollars and not their opinions of the two teams involved but it is a proven fact that the two go hand in hand. 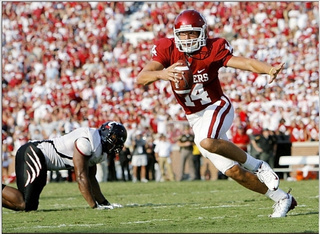 Looking over multiple predictions from multiple sports writers and outlets this morning shows that the at least somewhat "knowledgeable" writers think that the Gators will win almost nine out of every ten times.  And we are talking about a 7 point or larger victory, not the Sooners losing a close one.  I'm going to go into this a bit further after the game (and if Florida blows them out then my argument will be   deflated, but I am obviously very confident that that isn't going to happen) but I think it is very interesting when a relatively evenly matched team in a big game hears for an extended time period how they have no chance and how said team usually responds (think 2008 NY Giants).  The media has made a huge deal out of the Dominique Franks comments earlier this week, but the Sooners have been hearing that they can't keep up with the Gators and that they don't belong on the same field with this team and that their defense is junk for their entire trip out here in Miami and I have to believe that doubt is the strongest motivation a team can have...   We will see tonight but for now check out these picks from the two links below:

See the rest of the picks after the jump...

Check the rationales and links for all picks here:

The Wiz of Odds: Which Team Wins?