Share All sharing options for: Only 10 Days Until Signing Day Buff Bites

Don't expect a ton of commitments today, maybe one or two. I would guess if CU had any today, it would be C Shaun Simon. That is very different from the last two Sundays that have been extremely busy, totaling 6 commits between them including DE Nick Kasa and DT Edward Nuckols. You never know, though. Hawkins may continue to roll.

Two future Buffs were on the Costa Times (Northern California) "Cream of the Crop" list for 2009: WR Diante Jackson and OT David Bakhtiari. You can scroll over their pictures to see what scouts are saying about them as players. For Diante, the words explosive, a difference maker, quick feet and physical are used to describe him. In a separate article, they talk about how one of Diante's cousins is going to Oregon and how they have become like brothers over the past year. As for Bakhtiari, they admit he has to develop but he plays hard, is physical and smart. He has a mean streak and will be a steal says one scout. Diante was #1 on the list and Bakhtiari at #8.

The Boulder Daily Camera has a small article about the Buffs most recent commit in Nevada LB, Liloa Nobriga. The Las Vegas Sun also had a mention of Nobriga's commit to the Buffs. He was supposed to visit Washington this weekend but canceled his trip because he is set on CU.

"It just felt right," Nobriga said of his trip to Colorado. "They have the best facilities and good academics. It's everything I was looking for in a school."

Here is a sweet picture of Nobriga: 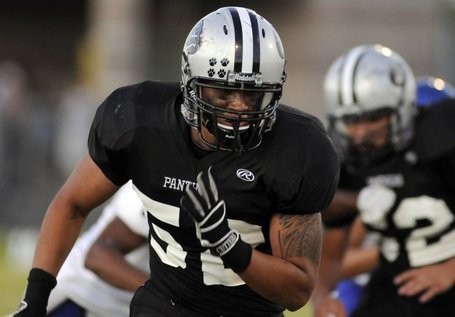 According to the Rocky Mountain News, Colorado freshman guard Ryan Kelley could miss the rest of the season after dislocating his left kneecap during practice. Kelley, who was averaging 2.9 points a game this year, is expected to miss eight weeks after injuring his kneecap Thursday.

The Buffs basketball team lost a tough one yesterday against Kansas State, losing in overtime 77 - 75, in a game that CU had ample opportunity to win the game. Bad turnovers and an ability to get a big rebound towards the end of the game allowed Kansas State to win the game. In fairness the Buffs, they fought back in both halves after trailing by double digits. Dwight Thorne was great, scoring 30 points and providing the only perimeter threat. Cory Higgins never could get it going. Both of these teams really wanted this win, more like needed this win. Kansas State hopes that this can turn their season around and give them some swagger back.

I think Neil Woelk of the BDC hit it on the head when talking about Buffs basketball. Yes, they have improved over the last four games (probably more a result of the opponent than anything) but

"if they're going to turn the corner -- this year -- they need to harness that desperation and produce better decisions and smarter play, and erase the lapses that give opponents opportunities for 10-point runs."