Hopefully the Recruits Brought Jackets: Preview of the Potentials in Boulder

Share All sharing options for: Hopefully the Recruits Brought Jackets: Preview of the Potentials in Boulder

Okay, so it isn't that bad, but compared to last weekend, it is a major cold front. It was more important to have good weather last weekend as Dan Hawkins and the staff welcomed in 13 potentials. Six of them have signed and I would not be shocked if three more chose the Buffs. Those are results! This weekend is pretty low key for this late in the recruiting process as it looks like the Buffs know who they are going to get and are cruising into the finish line. Don't worry, their are still tons of storylines to play out in the next 10 days most notably at wide receiver. The Buffs have done a good job addressing the issue at defensive line getting Nick Kasa, Edward Nuckols, Forrest West and Nate Bonsu. If the Buffs could add Justin Brown, I love the position of the defensive line. On paper, Colorado seems to have addressed the wide out spot with Diante Jackson, Andre Simmons and Jarrod Darden with potential commits in Emory Blake, Terdema Ussery, Markish Jones and Jewel Hardy. But like I said yesterday, it could be beautiful or it could be a bust. The only solid wide receiver right now is Jarrod Darden. Hopefully coach Kiesau can work his magic and firm these guys up or at least get them to call their shot so we can go into disaster recovery mode.

Here is what the Buffs have going on today: 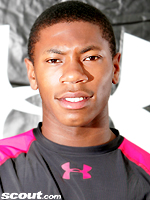 Commentary: He is the high school teammate of DB Byron Moore, yes the Byron Moore who decommitted from USC yesterday. But this review isn't for Moore, it is for Moten. Josh wants to play quarterback at the next level or at the minimum, be given a chance to show his abilities at that position. Moten plays bigger than his 6'0" frame first hints at. He doesn't have a bad release at all and most of his actions look fluid. I get excited when I see a potential athlete that could be a Buff. We all know we need some. He runs well with the ball in his hands and could be a nice option in the offensive game, sort of like a wild cat formation. He is a definite zone read guy. Moten is raw, though, and he will need to develop his passing game. The athleticism is there and with some coaching and the proper system, he could be a solid quarterback. There is just so much about a quarterback that is difficult to assess from a few articles or highlight films. I think he could be a flex player on offense and could make a good corner back at the next level due to his athleticism. ESPN.com has a pretty good review of him.

see after the jump for the rest of the recruiting profiles... 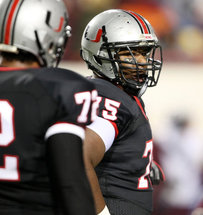 Commentary: Simon didn't start on the line until his senior year at Union High School in Oklahoma. I would worry about this if it was just another school but at the powerhouse that is Union High, starting means you are a good player. He is the teammate of TE Tracy Moore and Ath Terrell Williams, who visited Colorado but committed elsewhere. Simon definitely has the size and is probably the one recruit that I would feel confident in him committing to CU this weekend. Because of not starting until his senior season, there is little information or video. Couple in the fact that he is an offensive center, he goes relatively unnoticed in news clips. Here is an article about Shaun in the Tulsa World that is worth your read because it is definitely a feel good story. He lost his mother last year and was overweight his first three years of high school but he rededicated himself, got in shape, improved his grades (with the help of the CU coaches...the reason he really likes the Buffs) and was one of the best linemen on the State Champion Union team. You have to be rooting for a kid like that. Just by looking at his size and how the Buffs have already signed three offensive lineman, he could be a good option at defensive tackle as well, especially if he wants to work at it. Let's hope Shaun continues to make strides as a person and a football. player. It would also be good to start a small pipeline into Union High.

Commentary: Finkenberg is another prospect that didn't see his stock take off until later in the process but he is well thought of, enough to get a three star ranking from rivals. Finkenberg is an interesting prospect. He moved from tight end to the Tesero left tackle position and he excelled. Of course, such a move makes you raw, like most lineman making the transition from high school to college. He will also need to add weight but the fact that he played an athletic position like tight end makes me like Finkenberg. He has good feet and is able to out-athleticize the defender. He isn't completely decided on football either as he is a great high school pitcher:

But he also is considering playing baseball in college. Finkenberg is a right-handed pitcher with a fastball that reaches the low 90s. He recently attended a USC baseball camp.

That is an athlete my friends. He was also named All County first team in Orange County.

Here is a look at Finkenberg introducing himself as an All County selection: 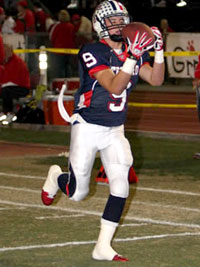 Commentary: He is hampered by his measurables but check out these stats in a competitive league where Tesoro plays: 86 receptions for 1,259 yards and 15 touchdowns. Intercepted nine passes. County defensive player of the year. He is probably in the top 10 of most decorated and talked about players in California this year. Many fans from California love this kid because of his production and the plays that he makes. His dream school is USC and they offered him a walk on spot with the potential of a scholarship down the line, same with Colorado. Greg Biggens of ESPN.com recruiting had an article on him this weekend, saying that he picked up his first offer from San Jose State. He sounds like a level headed kid that wants a chance to show his talent. Here is what he says about himself:

"I understand it, I don't have the size or speed most of the colleges are looking for but I know I can play," King said. "I may not run the fastest 40 time but on the field, I have game speed and I really wish that's what more of the schools would look at. I mean how many times do you ever run 40 yards in a straight line.

"I think if you look at my film, you'll see I have enough speed and I'm able to run routes at full speed, cut and change direction and that's more important I think. Things are starting to pick up a little though and I'm excited to see how it all plays out.

Here is a little piece on him receiving the All County defensive player of the year.