As a follow up to the post this morning, here is a little more information on the recruits that are in Boulder this weekend. Their will be another post featuring the other 5 or 6 depending on how much information I can get on the JUCO receivers. Check out the big fella below. Breakdowns of Zach Grossnickle, Justin Brown and Liloa Nobriga are also included after the jump... 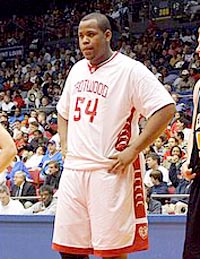 Commentary: Freeman is the type of big-body offensive tackle every elite program dreams of. He is sort of a sleeper guy because he was a basketball player and didn't play football until his junior season. Watching his highlight videos below, you will see that Freeman has an unfair advantage over his opponent. Freeman would walk into Colorado and be the biggest player on the roster. Since he was a basketball player, he has good athleticism and seems to have good body control for a big guy. Obviously, he doesn't have the technique since he has only played football for two years but the potential is their with his size. His highlight video mostly shows him in pass protection. It will be interesting to see how he works in the run game. In the pass game, though, he is either too big to get around or he will get his paws on the defender and simply shove him to the side. A red shirt year of weights and technique will do wonders for this kid.  Huge potential, huge upside, huge presence. With guys like Miller and Solder already in the system, Freeman could afford to be a project guy under Grimes. His athletic ability will aid his development.

see after the jump for a breakdown of three other recruits... 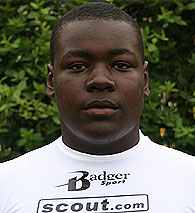 Commentary: On first look, Brown's measurables don't suggest a defensive tackle but watching film on him, you realize that he has the frame to add weight. He looks like an athletic defensive tackle and has a different body shape than say an Edward Nuckols. He is a hot prospect because of that potential. Brown will have a lot of work to do, though. The first thing that catches my attention when I watch the little video that is out their is sometimes he plays "catch the blocker" rather than attack the blocker which either makes him stand straight up and let the blocker drive him or he gets very light on his feet and does a lot of watching. This will probably be improved with adding more weight and definitely learning better technique like a power rush. Playing with power will be a key in Brown's college career. ESPN says that "he has a solid motor. He is an adequate arm tackler. Against the pass he will flash the ability to punch and turn his hips. Needs to play lower, but when he does he can bull rush some. Brown is a solid prospect. He needs to add bulk and keep developing his game." 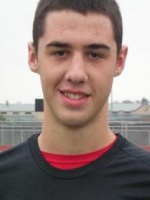 Commentary: It's obvious that Grossnickle has a good leg (as you can see from the video below) and what makes him extra useful is his ability to handle kickoffs, field goals and punts. I am still trying to figure out what he is better at. ESPN reports him having made 35 of 37 PAT's and 12 of 13 FG's. His career long is 53 yards but he did hit a 61 yard field goal at the Ray Guy Camp according to scout.com. He does have room to improve, in my opinion. He will have to get more height on he kickoffs and field goals. Kickoffs are on a line drive. If he kicks it out of the end-zone, its fine but the kickoff tee gets shorter at the college level from the high school level so he will need to adjust to that. One of the biggest weapons in football is to have a kicker that can make a team start on the 20 yard line every time. In Boulder, with the altitude, that should be a given. Zach needs to provide that on the road as well. He will be visiting with his teammate, TE DaVaughn Thornton. 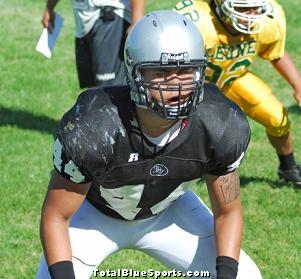 Commentary: Norbriga is an interesting prospect. He is a tall, rangy linebacker who shows a good straight ahead game. He looks to best suited as an edge rusher as he has pretty good speed. He will need to add some strength and show the ability to make plays sideline to sideline. I like him. He is a football player. Raw but likes to put his nose in their and mix some things up. That is the most important part of playing linebacker. Like all guys coming out of school, will benefit from strong coaching to develop more cerebral linebacker instincts. You have to love the size.