Last week may have been the game that I labeled as the most important for THIS current team but the upcoming game against Texas will be just as important for the future Colorado Buffalo teams. After the West Virginia game, DT Nosa Eguae committed and we also learned that Jeff Bzdelik and the Buffaloes basketball team was aided in the recruiting process by the "Black Out" game. If Bzdelik was smart, he would fly in recruits for all the football games because the crowd and the level of play will be much better than what is seen on the hardwood this year. Can't fault Bzdelik so far, he has locked up two pretty good players in SF Keegan Hornbuckle and PG Alec Burks, both of whom should get a ton of playing time as freshman.

Back to football. This weekend the Buffaloes will have 9 potential recruits and commits in town to witness the Texas game. There is a ying and a yang to having the recruits here this weekend. On the positive side, the game will be at night on FSN's nationally televised Big 12 slate.  The crowd will surely be amped up for Texas just like they were for West Virginia. And if I remember correctly last year's homecoming game and the first week of Big 12 play that a team favored by 20+ points came into Boulder ranked in the top 5 and left with a loss. The yang of the story is that while FSN is great, if the Buffs won last week against FSU, ESPN College Game Day would have probably come to Boulder. I doubt that they wanted anything to do with Auburn @ Vanderbilt. At least Nebraska lost which precluded the Huskers from getting the nod from Fowler, Corso and Herbstreit. There is a chance Texas overlooks CU with the Red River Shootout coming down the pipe next week in what could be deemed the college game of the year with the #1 ranked Sooners (LSU vs Alabama in a couple of weeks may challenge my game of the year comment). But Texas is a really good team with an experienced quarterback who is playing lights out. I am pretty sure the Buffs won't get the same lackadaisical team like OU was a year ago.

Either way it should be a good atmosphere in Boulder. A strong showing or an upset win would go a long way in solidifying some of the players for the Colorado Buffaloes future. Below are four of the recruits coming to Boulder. I will preview the other five later. 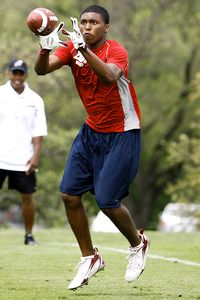 Commentary on Blake: It is interesting because Blake currently list his top five as Boston College, Texas Tech, Missouri, Florida, and Kansas but he is coming for a visit to CU. Texas has also offered Blake a gray-shirt opportunity which could be the X factor in the whole recruiting battle. Blake doesn't have the high school stats that will blow you away or the speed to burn you but he sounds like a good technician. The reviews state that he has good body control, strong hands and can run sharpe routes. Teams like his size and his ability to work the middle of the field. The biggest concern regarding Blake is his ability to separate from defensive backs. His father is Jeff Blake, former NFL quarterback. I would compare him to a bigger Scotty McKnight. We all know the the loss of Kendrick Celestine and the inability to count on Markques Simas to remain eligible, wide receiver is a need position for the Buffaloes. The Buffs have signed Jarrod Darden but the addition of 1 - 2 other WR's would be helpful especially with Patrick Williams graduating. I am confused by Emory Blake not listing CU in his top but still visiting but he does list Florida in his top 5 but they are yet to offer Blake. 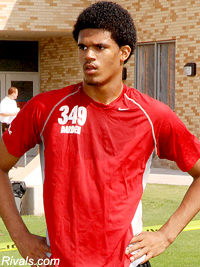 Darden was the second 2008 Buffalo commit. Being 6'4" 211 lbs, you can tell why the Buffs are excited about his size. To bring a true recruiting/draft term to fruition, Darden is sneaky fast. Might be a good candidate to switch to tight end. Darden also has a big wingspan and is tough in traffic. He will be a prime goal line target. For his weaknesses, ESPN says that "Darden can take too long to reach top speed. Is an inconsistent route runner and rounds off cuts too much which does not give him the necessary separation skills versus top flight corners. Is still "under construction" as a football player, but his tools and obvious impressive measurables give coaches a lot to work with." They said the same things about Brandon Marshall in college tool. You can't teach the size portion of what Darden brings to the table. Darden broke his ankle before his senior season so he was lost for the year. It is not believed to be an injury that will affect his college career. 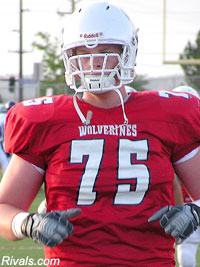 As you can tell from this year's Colorado Buffaloes team, offensive and defensive line depth is huge at the college football level. Harris is one of the those in-state kids that you need to get and continue the pipeline up to Boulder. Harris joined other Buff recruit Nick Kasa up to Oregon the week they lost to Oregon which hopefully will lead to Harris coming to CU. Harris has pretty good feet for a big guy as well long arms and a good physique. Most sites say he could use a little more lower body strength but has good overall upper body strength and moves relatively well. Like all big men, he needs to work on getting lower and working with leverage. Footwork must improve with good coaching. Right now Harris has narrowed down his choices to Oregon and Colorado. 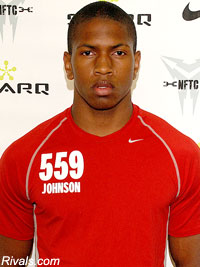 Johnson plays both defensive back and wide receiver for his high school team. ESPN.com says that "overall, Johnson's versatility, athleticism and instincts as a football player are impressive. We project he will more than likely play defense and excel on special teams." Biggest critique is that he lacks game breaking speed. He will need to be polished at the next leve to hone his skills to adequately allow him to cover Big 12 cornerbacks. Right now he is athletic football player and more of a run support guy and not so much a lock down corner. I like his size for a defensive back which is something the Buffs currently lack in their starting defensive backfield.