Share All sharing options for: Worst of 2008 #8: Home Crowd Blues

Winning cures numerous sins. We know it, we want it and we need to win for a multiple number of reasons. One of those reasons is some of the embarrassing situations that continue to happen at Folsom Field in the stands, not on the field. You would hope that the chicken would come before the egg on this one and fans would act supportive and compe

tent before the team starts winning but that just doesn't look like it will happen.

The season started out well for the Buffs and the students/fans were behind the team. The West Virginia game was loud, the students were in full force and that first 5 minutes was a thing of beauty. CU football looked to be on the rise and Folsom was electric.

That all changed when the University did a cool promo with t-shirts and hats for the "Gold Out" that was schedule for the Texas game. Well, the University learned the hard way with, once again, a ridiculous sect of the student body frequently throwing those free shirts on the field. The Texas visitor's section was continuously loud. It was embarrassing. For as much as I don't like Texas, they still have pretty good fans and a good following. They have extensive history and tradition. The way Colorado was portrayed that day made the program like junior varsity and still a second rate team, not worthy of the big boys. Here is what I said in the post game wrap up:

Now to the fans. I am ashamed to be a CU fan this morning not because of the play on the field but because of the students. I realize we have students who read this report and we thank you. But hopefully you weren't one of the people/idiots throwing shirts on the field, right in front of recruits, all night long. And then you leave in the 3rd quarter. I am in my mid 20's so don't call me an old fart. I don't see Texas or OU (the class of the Big 12) throwing items on the field on a regular basis like Boulder fans do. The fans not in the student section don't stand up. Luckily or unluckily on other fronts, there were a lot of Texas fans in my section so the complaining fans who yelled at them to sit down in the first quarter where forced to finally stand up as they refused.

The rest of the home games, students and season ticket holders were 15 - 20 minutes late showing up or didn't show up at all. The Ralphie Report gets a lot of students on the site and we know that you aren't the problem as the people who go to these games and leave or throw t-shirts on the find obviously don't spend their time talking or researching Buffs. But when the back half of the stadium is unfilled, CU football looks second rate.

Another thing that irks me is the season ticket holders. I am envious of games I see or attend that are absolutely crazy. I hardly ever watch an SEC game where the fans sit down. During timeouts, in blowouts, at halftime...they sit down. 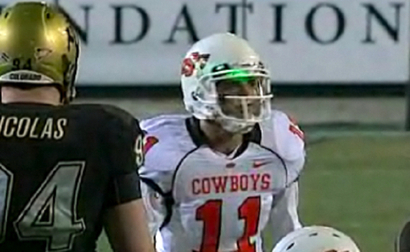 But during the game, it is nuts. Fans in Norman and Lubbock are always enthusiastic. I am a believer that crowd noise at the college level is a huge factor. For home team energy, intimidation of the opposition or difficulty in communication, a loud stadium only helps the Buffs. I can't tell you how many times I got yelled at this year because I stood up and cheered.

Then the famous laser pointer game ensued and the national media and message boarders ripped the fans, the team and the program.

It was another tough year for CU fans and their perception around the country. And I can't fault anyone for thinking what they do about Buff fans because of it. There are many good fans at Folsom but their continues to be a few malcontents that ruin it for all of us. Hopefully season ticket holders join me in standing, supporting the team loudly and the students start beating the crap out of those who throw things on the field.