This one is sort of out of left field but scout.com is reporting that 10 CU recruits will be in attendance tomorrow including Buffs #1 priority and Colorado prep Nick Kasa who is deciding between the Buffs and the Florida Gators. We don't know who all of the other ten players are but stay tuned. Here is two that we know will be in attendance: 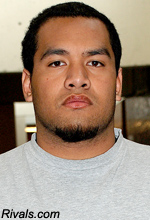 Ranked the #1 Run Stopper in the nation according the Rivals.com. Sounds like a guy we need with big DT George Hypolite and DT Brandon Nicolas gone next year. ESPN had this to say about Latu:

Heimuli has great size and is a load in the middle of the line. He's very quick off the ball and his overall size, strength and athleticism translate very well to college.

Washington State, Arizona, Colorado, Nebraska and BYU are Latu's top 5. This is a definite need. If we can get Nuckols, Kasa and Heimuli, the defensive line would be stout. Two out of those three would also be phenomenal.

Ranked the 45th best offensive tackle in the nation. Not a big guy like most tackles but really strong and athletic. Will be asked to put on pounds in college but he runs a 4.9 forty right now and has a good frame to grow into. Strong prospect who plays with a good amount of intensity

Abele has become a "hot prospect" getting a lot of looks recently after taking a while to get noticed. He is also being courted by Arizona State, Oregon State and Boise State.