Share All sharing options for: "Texas A&M is for Huggers" Buff Bites

Texas A&M is a bunch of huggers? The Aggies change of fortune has caused them to stop dissing each other and start loving each other:

"During the Texas Tech week, you could really see a big change in the locker room," Hunter said. "There were a lot of guys going around hugging everybody. There was a lot of excitement."

Texas A&M is going through just as big of a youth movement as CU. Why can't the Buffs' offense work? Oh right, it all starts at the quarterback position. Get this stat:

Freshmen and sophomores have made up 74 percent of A&M's total offense.

How about this figure: Texas A&M has 25 commitments already. 25! That is a ton of players. The Buffs on the other hand have 5. Boy it is nice to be located in Texas. Rumor is the Buffs are looking to sign 18 recruits this year.

Once again, offensive coordinator Mark Helfrich stresses that change is coming. The change has been detailed as "simplifying" things. I hope "simplifying" means scoring. I like that the coaches are admitting that they need change. That is always a good sign. It just came about 4 games too late:

The El Paso Times has put out a nice capsule of the game Saturday. A lot of things will have to give in this game again. The Buffs are defeated on the road this year while Texas A&M is 1 - 4 at Kyle Field. Texas A&M has the 12th ranked scoring defense in the Big 12 while the Buffs have the 12th ranked scoring offense in the Big 12. Isn't it depressing that this is the third week in a row that the Buffs are playing a horrible defense and CU can't do anything with it? You would think if the Mark Helfrich led offense had a pulse, they could be a top half offense in the Big 12. Frustrating for sure.

It's a sad day when you need two punters to kick because of where the ball is on the field. I have really never heard of this before. How about the Buffs put the guy back there that can kick the ball the highest and farthest? Again, getting too cute for our own good. I can see it now: A punt formation with Suazo, DScott and DiLallo lined up 15 yards behind center. Who is going to kick the ball now opponent? We got you good!

The Buffs alternated punters Matt DiLallo and Tom Suazo against Missouri, with the left-footed DiLallo punting when the Buffs were on the right hash mark and the right-footed Suazo punting when CU was on the left.

continue reading these bodacious Buff Bites after the jump...do it!

CU recruit and Colorado prep, DE Nick Kasa, will play January 3rd in the US Army All American All Star Game.

DT George Hypolite is a quarterfinalist for the Lott Award:

The Lott Trophy is the first and only college football award to equally recognize athletic performance and the personal character attributes of the player.

CU Volleyball beat the #2 Nebraska Cornhuskers last night in a shocker. Second year in a row that has happened. Any chance you can post this again, the better: 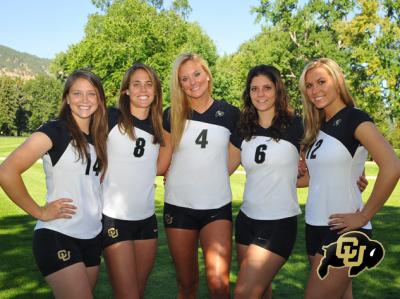