Congrats to phatmack for winning week 9 of The Ralphie Report's College Pick'em contest. Phatmack and walt2121 both tied with 13 out of 15 correct choices but phatmack guessed one single point better in the Nebraska v Baylor tiebreaker for the outright win. Both walt2121 and phatmacks performances this week moved them up four spots in the overall standings to fifth. Solid performances again by Rebel14, roxbombers, kmchugh and BuffZag. Within the next two weeks, we should be doing a prize giveaway. Phatmack will be entered into one of the year end prizes for winning a week.

As for the overall standings, the gap has been narrowed with many now in striking distance of bigcountry, who has led since Week 1. Bigcountry has seen his lead shrink from 5 to 3 as BuffZag made a charge after a rough last week. Six of you are within 5 points of the lead with plenty of weeks left. It should be a good shootout. Just two weeks ago bigcountry's lead was down to two points to BuffZag but country responded to lengthen the lead. Will he do the same? 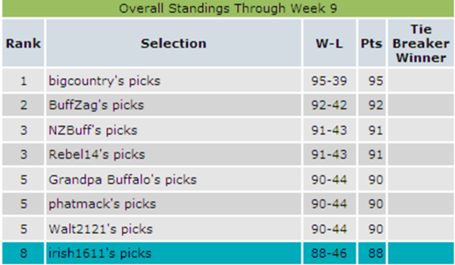