There wasn't supposed to be a part three but we have also learned that a tenth recruit will be in attendance this weekend as the Colorado Buffaloes host the #5 ranked team, the Texas Longhorns. Lucky number 10 is WR (yes another WR) Diante Jackson from Northern California (Part 1 and Part 2 of the CU Recruit-athon series). Here is The Ralphie Report's take on Diante: 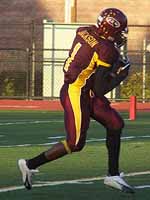 Commentary on Jackson: A lot of people like the way this kid is put together. Seems like a great energy guy. Jackson has already taken an unofficial to Colorado and afterwords was quoted as saying that Colorado is number one on his list due to his relationship with Coach Keisau and Coach Hawkins, his liking of Boulder and the energy that the program exudes. Since then he has visited the vaunted Oregon Ducks and has similar thoughts about that program. Right now Colorado, Oregon and Arizona State are in his top three. This is one of those kids you don't know what is going to happen. He seems really high on both CU and Oregon. Jackson has good strength and speed to be a successful wide receiver at the college level. He is built well and can best be described as a relatively dynamic wide receiver.

It would be nice to get either Emory Blake or Diante to go along with Jarrod Darden at the wide receiver position. If we could also lock up DT Edward Nuckols and OT Jack Harris on this trip, the Buffs would be in a good spot. It will be interesting to see what happens with Athlete Kyle Van Noy. He looks like the cream of the crop right now of the 8 who are coming that have not committed. Hopefully Jarrod Darden and Jordan Wynn can help convince a couple of these guys to join the team next year.

As a reminder, here are the 10 recruits/commits that will be visiting Colorado this weekend: