Although this weekend doesn't have the magnitude of visiting recruits the Texas game did, the Buffs would love to get these undecided recruits to come to Boulder. Three players will be in town Saturday night as the Buffs take on Kansas State.  CU commit QB Clark Evans is one of the three players. For more info on Clark, see The Ralphie Report's interview with him earlier this week. 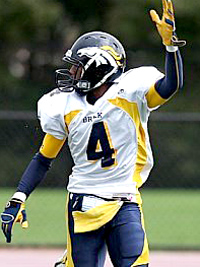 Commentary on McNeal: Ranked as the #9 WR in the nation by ESPN. McNeal has a great combination of height and a quick burst that makes him a threat to get beyond the defense easily. He has a long stride and seems to be very agile in his route running. His film shows great play making ability which would be a big find for a Buffs team that has a limited amount of game changers. He has the ability to play in his freshman year. Very similar to a Josh Smith but with a better stride, quicker ability to get to top speed and taller. McNeal has all the tools to be a good player at the next level. Hopefully he sees that this CU offense, when it gets healthy on the line, could be special with him as the big play threat. McNeal decommited from Michigan this week as he felt he needed to open his recruitment up after he decided too early. McNeal is sort of on the same radar as Emory Blake was last week: I don't see the Buffs chances at landing him being over 50%. My guess is that he will end up staying home in Minnesota. Don't be surprised if he ends up at Florida or OU either. Big thing for him is go put on about 10 - 15 pounds before he gets to college. 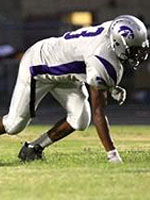 Commentary on Graham: How do you know a kid is good? If he is recruited like Graham is; from coast to coast. Graham is somewhat of a tweener who prefers playing defensive end but when you weigh only 230 lbs and can run a 4.59 forty, teams have a vision of a dominant linebacker. The only expressed weakness around this kid is due to his weight while playing a position that requires both a speed and power rush. With a great motor and a quick move on the snap of the ball, he has the speed and ability to be a matchup problem wherever he lines up on the field. He seems to be high on USC but the Buffs have a chance at this kid if they tell him he can play defensive end. And there is no reason the Buffs shouldn't try him there. CU has a hard time getting after the quarterback and even though Graham will need to put on a quick 20 pounds, his speed would be hard to handle for any offensive tackle.