And the winner of the $25 ESPN gift card is....broncosfanstuckinsd! He beat out NYCskibum based on the tiebreaker, picking the USC game at an 18 point spread. Either one of those guys would have been acceptable winners as they both frequent the board! Congrats to broncosfanstuckinsd. Just shoot us an email to confirm your email address at theralphiereport@gmail.com and we will send you a $25 gift card for that new CU shirt or Broncos swag. Ah, if only my Irish wouldn't have let me down, I would be deciding between Broncos gear or Buffs gear. 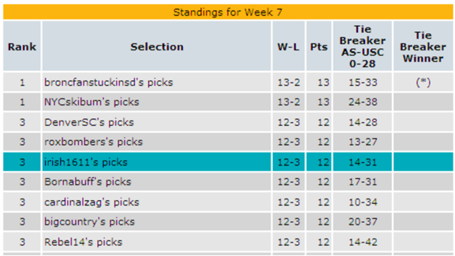 Overall, bigcountry continues to turn in great numbers, going 12 - 3 last week and keeping a 5 game lead of resident second place member BuffZag who went a disappointing 9 - 6 for the day as his older brother, irish1611, closed the gap on him with 12 - 3 day. Good weeks by Bornabuffm cardinalzag and Rebel14. If bigcountry slips up one week, there is a lot of people who are within striking distance. That is a big "if," though, as bigcountry is steady eddy right now and in control of getting that CU jersey or something of equivalent value. 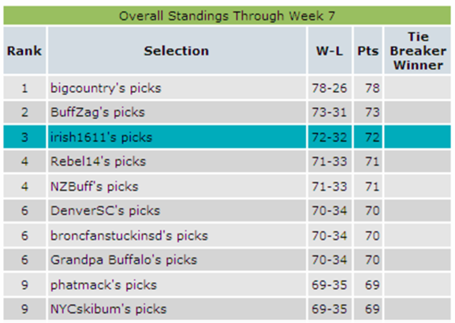 FYI, we will be posting the other quarterback commit, Clark Evans interview tonight so check back in later for that one as well.